“Time is money – especially in our time, for every company optimal accessibility is of prime importance. International markets steadily grow together, so the choice of the right location is a matter of important critical advantage.”

The region Limburg-Weilburg-Diez is formed by the Hessian district Limburg-Weilburg as well as the closely linked economical and social Rhineland-palatine town and association-municipality Diez.

The size of the surface is 845 km² and has a population density of about 238 citizens per km². All in all 200.000 people are living in this region. Especially over the past few years the number of citizens has increased. It’s the best indication of Limburg-Weilburg-Diez’s outstanding infrastructure, traffic network, attractive low mountain range landscape, extensive range of leisure-time activities and cultural offers as well as family friendly and service oriented communities. 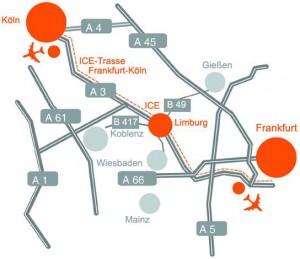 The very good traffic accessibility makes Limburg-Weilburg-Diez evidently one of the best locations of Germany. Located directly at the freeway A3 (Exit Limburg South, Limburg North and Diez), with a dense network of highways (B54, B8, B417, B454 and especially B49 as east-west-axis) and the only ICE-station in middle-hesse (Limburg South), the region provides all the best conditions for a commercial establishment.

Airport
The airports Frankfurt/Main , Cologne/Bonn and Hahn are fast and easily accessible. Especially the airport Frankfurt/Main is reachable within 18 minutes via ICE starting in Limburg, via freeway A3 you need half an hour. The 110 airlines of the biggest airport of continental Europe, Frankfurt Main, start in 109 countries with altogether 290 destinations.

Train/ICE
The high-speed network oft the Deutsche Bahn connects the region even closer to the most important economic areas Rhine-Main and Rhine-Ruhr. Also all the other German and European metropolises are fast and easily reachable vi ICE 3. In 40 minutes you can reach Cologne and in around 4 hrs Munich or Hamburg.

Also there is a shuttle-service between the train station Limburg in the centre of the city and the ICE station Limburg-Süd to provide a constant journey/to bring travellers to their destinations as soon as possible.

Communication network
The region exceeds the Hessian standard in matters of traffic and communication. A top modern fibre glass network provides the region with an optimal telecommunication infrastructure. The infrastructure is the technical spine for the exchange of data, words and pictures and has the latest standard of performance.